It is likely that stone has been quarried around Bampton since the time of the Romans; for some centuries, lime was produced in the local lime kilns to make the mortar. The church is built of local stone, as are many of the older buildings, the bridge, and numerous walls.

It was in the nineteenth century that the quarries provided most of the local employment, and Bampton was a noisy, dusty, industrial site. 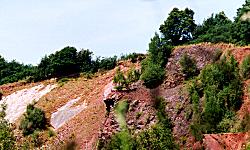 Although there are many quarries around the town, it is quite difficult to spot them because trees have grown up to cover the scars in the earth. Driving into the town along the Tiverton Road one is driving through a series of quarries, and on the hillside to the east of the town, the red-coloured face of Kersdown Quarry is apparent - it looks quite spectacular in evening sunlight. It was in this quarry that a land-slip occurred at the beginning of the 20th century, burying the equipment under rubble. It was impossible to retrieve, and is still there.

It is only by looking at old maps of the area that it is possible to appreciate the full extent of the quarrying. The trees on the south side of Bampton screen out the old quarries: Luttrell, Bowerclose, Bailey's, Lower, Duvale, and several other un-named ones. The geology around Bampton is also of some interest. Five Oaks quarry is protected as a Site of Special Scientific Interest. 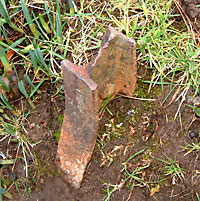 The railway (which opened in 1884) played an important part - many thousands of tons of stone were carried by rail, narrow gauge tracks running from the quarries to the railway sidings where the small wagons' contents were transferred to the railway trucks. The little wagons ran down by gravity, but were horse-drawn back to the quarries and crushing plant.

After the second world war, stone was gradually transferred to road transport, and this eventually contributed to the loss of the railway in 1963.

The quarries provided stone for the Exeter by-pass in the 1930's, 120,000 tons of stone for the reservoir dam at Clatworthy, and 200,000 tons for Wimbleball dam in the 1970's. Have you ever noticed convenient "passing places" in narrow country lanes? That is where piles of quarry stone were tipped for the stonebreaker to reduce to fist-sized lumps and spread across the road, ready for a roller to come along and press the surface into the mud track. There was room for sufficient stone to reach the next such "passing place".

The old map below shows how the quarry area looked in 1907. Most of the quarries are now overgrown by trees.

All drilling in the quarries was done by hand; one man held an iron stake some 18” long which was wedge-shaped at the bottom whilst two others, each wielding a sledgehammer, took turns to strike it. Between strikes, the stake was slightly twisted, providing a drilling movement. Gelignite was also used, being stored in a house in Back Street until the end of the 19th century, and transported to the quarries strapped to the crossbar of a bicycle. In winter the gelignite was too cold for use, and the quarrymen used to strap it round the stove in their hut to warm it. They did this once too often. One day they were left with neither stove nor hut!

On April 15th 1908 accidents at the quarries took a more sinister turn when the first known fatality took place at Bampton Quarries. Rock was being drilled manually at Kersdown Quarry, and filled with explosive which was then detonated from a distance. Of six charges laid, four exploded and, contrary to all safety instructions, Alfred John Harper, aged 48 and who lived in West Street, went to investigate the failure – at which point the charge blew, seriously injuring him, and he died a few days later from his injuries. He was taken in a wagon to the Infirmary at Tiverton, accompanied by a Bampton policeman, to whom he related the details of the incident. He contracted gangrene, from which he died on April 23rd, and was buried at Bampton on April 26th. It seems that the gelignite was being used at sub-zero temperatures which made it unstable. Interestingly, the 1896 map shows Kersdown Quarry disused.

Compensation of £190.10.11d at the rate of £13.0.0. half-yearly was paid to his widow, Ann Marie, which enabled her to purchase a shop in Brook Street, selling sweets which she and later members of her family ran for a good number of years. (The shop, now converted to a house, stands on the corner of Brook Street and Bridge Terrace). Her son Harry took the shop over some time later, then her daughter Gladys Lee (Mrs. Yum Yum to some local children!) and her husband Ernest. Gladys made the only home-made ice cream in Bampton, but only on Saturdays. She used to send her son to Bampton Station to await the arrival of the train from Exeter to collect a tray of ice, with which he dashed back home for the ice-cream making to start. By a horrible co-incidence, Alfred’s brother, Samuel James, was killed in another accident at Whipcott Quarry near Holcombe Rogus in 1915. 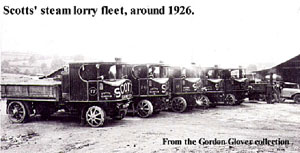 Scott’s were ahead of their time in terms of mechanisation. Steam lorries replaced the drams (described in Quarry Transport below) in the early 1920’s. They were restricted to 12 m.p.h., and their fuel consumption was 18 m.p.cwt (miles per hundredweight of coal). During the 1930’s they began to be replaced with diesel engined ones. Lorries were attracting a road tax based on their weight, and the steam lorries weighed some nine tons without their supplies of coal and water. Also, the new diesel engines did not take two hours to start in the mornings. The steam lorries were sold to the London Gaslight Company for use on their own land. Scott’s also had a number of steam rollers, still in use in the 1950’s, which were later sold to Burma for use on their new road network. 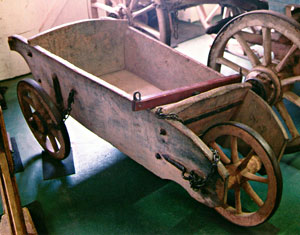 The first three-wheeled carts to be produced in Devon were made at Bampton during the 18th century and were called the Bampton Barrows. They were three-wheeled (one in front), horse-drawn, and used in the quarries and fields until the late 19th century, carrying stone and waste away. They were commented upon by William Marshall, a traveller in 1796, who had not seen anything similar anywhere else in the country. One of these barrows is in Museum of Rural Life in Tiverton. They were last made just after the 1914/1918 War.

Earlier carts known as butts were known which were two-wheeled and horse-drawn, the horse acting as the third wheel, possibly a throwback from a Roman design. 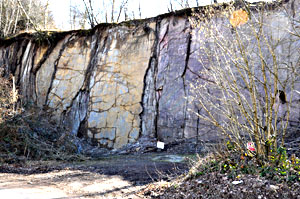 This rockface is one of the few places you can still see evidence of the old quarries - it is visible on your right as you drive into Bampton along the Tiverton Road, opposite the entrance to the new housing development.

The rocks here are rather yellowish in colour and almost vertical, similar to the rocks at Holmingham near Cove.

Scotts Quarry - Photo gallery Images of the quarry after it closed showing the extent of the buildings and machinery.