The Bampton Limestone Group was formed during the Lower Carboniferous Period which lasted about 65 million years, starting some 345 million years ago. Underlying these are the older Devonian rocks which also form the uplands of Exmoor.

The Bampton Limestones, which contain fossils, began as sediment on the sea bed when England, although deeply under water, was just about on the equator. The rocks of the Devonian Period were formed during the preceding 50 million years south of the equator. The land which was to become England has drifted slowly north and to the surface since. Massive forces within the Earth have caused some rocks to push through the upper layers. and others to stand at up to 90" from their original horizontal. A classic example of the latter is to be seen at Holmingham Quarry near Cove, just south of Bampton.

The carboniferous rocks of S.W. England are known as the Culm Measures (260 to 340 million years old) and stretch from the north Cornwall coast to Westleigh, and north Dartmoor to south Exmoor. Bampton is in the Crackington Formation. 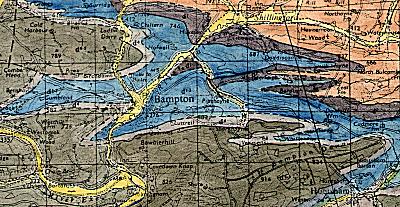 The blue coloured area on which the town stands are Lower Carboniferous Bampton limestone group: cherts, limestones, and mudstones. The purple area represents Doddiscombe beds made up of marl and black laminated shales.

Bampton Down in the lower right area (coloured grey/green) is Upper Carboniferous sandstones and shaly mudstones.

Also during the Lower Carboniferous Period, shales (dark grey, almost black slates) were formed, those predominant in the Bampton area being the Dowhills Beds which were found by aerial survey in the 1960's to be mildly radioactive. The mud became compressed by the weight above, and once the land had risen from beneath the oceans, dried in layers. It is these which form the slates of the Dowhills Beds, an outcrop of which exists and has been quarried at Zeal. More shale beds exist at Doddiscombe and Hayne Beech in Shillingford. The shales contain no fossils. The beds (a steeply plunging anticline) at Kersdown contain a mixture of limestones, shales, and radiolarian cherts. Pithill Quarries show shales interbedded with flaggy limestone beds from higher up the Lower carboniferous series.

The slanting line on the above map indicates the cross section which has been drawn below.

The orange coloured area labelled 'cd' are from the Devonian and Carboniferous era: these are Pilton beds made up of grey slates with thin sandstones. The grey area labeled 'd4' are Dowhills beds as described above.

By contrast, the geological structure around Tiverton, Halberton, and Cullompton are of the Permian and Triassic period, and are made up mainly of marls, sandstones, breccia and conglomerate, and in Washfield there are some basic lavas - in the distant past, Devon has been quite a volcanic region!

It is these combined forces of Nature which brought prosperity to Bampton in earlier centuries.

Back to Lime Kilns

Back to History page