The list of Listed Buildings is a lengthy list - a thick booklet in fact. It includes about 23 farmhouses and barns in the Bampton area, as well as about 40 homes and dwellings. Many of the farmhouses are early C17, although Giffords' and Lower Rill's origins are a century earlier. There are other listed items which might surprise you. 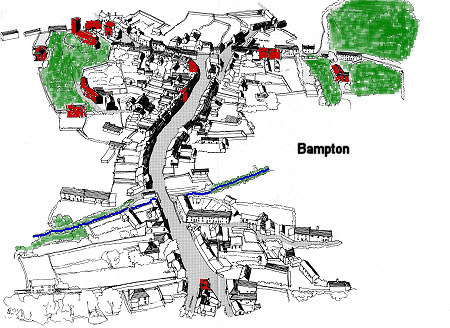 The Church is a Grade I Listed Building of which the tower is the oldest part (C13) and parts of the chancel, nave, and aisle are C14 and C15.

Leburn House and Lower Leburn in Luke Street are Grade II* Listed which is said to have been built in 1766 for Richard Bowden, mercer, although many internal features suggest it may be earlier.

All the remaining buildings on the list are Grade II, and these include Manor Mill and Millhead, eight buildings in Briton Street, six buildings in Brook Street, six in Castle Street, five in Fore Street and Newton Square, and two in the South Molton Road. Included are the Old Vicarage and Barnhay House, as well as some other properties elsewhere.

Not all the listed buildings are old: No.25-35 in Frog Street are Grade II Listed - these three pairs of semi-detached houses with corrugated iron roofs were built in 1922 for Bampton Urban District Council, and their construction was based on the principles that Lt.Col. Nissen of the Royal Engineers had developed in designing Nissen Huts.

The milestone in Brook Street is listed, as are the two telephone kiosks - "Type K6. Designed in 1935 by Sir Giles Gilbert Scott." Three of the grave-stones in the churchyard are listed, as are five sets of gates, a wall and some railings, and the recess in Newton Square which was originally a water stand-pipe (1871 - "a mark of respect and gratitude for MJC Phillips who presented Bampton with an improved water supply").

We also have Grade II Listed bridges - the bridge over the Batherm, Chain Bridge (to Stuckeridge House) over the Exe, and Oakford Bridge.

A List of Listed Buildings in Parish of Bampton

We are indebted to our local historian Tom McManamon for doing the typing.

Images of Listed Buildings - most if not all of Bampton's listed buildings can be viewed here.

Not listed, but of interest to English heritage, is the church boiler and heating system! - for more information check our church history page.