Milling corn to make flour was an essential component in sustaining a community, and the water-power provided by the River Batherm provided the rotation of the mill wheels.

Kersdown Barton, a farm on the south-east edge of the town, may well stand on the site of the Saxon Barton farm, and New Buildings (built about 100 years ago!) stand next to the mill where Barton House once stood. 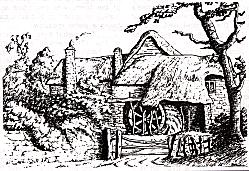 The Manor Mill was first recorded in the Domesday Book, published in 1087 but referring to 1066. In a Deed of 1694 it is recorded that there were three mills on the site, probably all running off the same wheel. It also generated electricity in the early 20th century - if the leat had not been filled in, perhaps it could today!

This drawing of Manor Mill House is based on one of about 1801, and clearly visible are the thatched roof and the housing for the wheel. Also shown is the 'launder', the water feed to the overshot wheel.

In this modern view of the mill house, the mill wheel is behind the building shown in the picture. Inside, the milling machinery is still preserved, although the mill leat (the stream off the main river Batherm which drove the wheel) was filled in during 1960. The weir in the river which diverted water into the leat still exists about a mile to the east, just short of Hukeley Bridge.

The leat ran across the fields on the north side of and roughly parallel to the river and on to the mill. The mill wheel shown has done well - "A completely new wheel, thirteen feet in diameter by four feet six inches wide, was made and fitted by C. Davey & Sons of Bampton in June 1910 for £39.8.0., reduced by £1.18.0. for the value of the scrap metal removed from the old one." 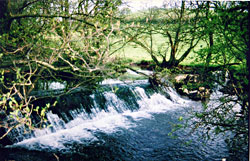 The picture on the left shows the weir across the River Batherm above Manor Mill - it is the point from which the leat was supplied to drive the water-wheel.

A working water-mill can be seen about 20 miles away in Dunster. 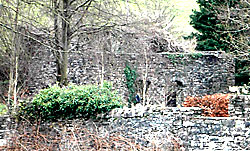 A stroll down Frog Street in Bampton and one used to be able to see a ruined building to the rear of the Old House. This was an old bark mill, used in the tanning industry. The building has recently been rebuilt and looks much smarter!

The bark mill was in use with about 48 pits when The Old House was a tannery in the 18th & 19th centuries (doubling up as a girls' boarding school with over 2 dozen boarders in the 19th! I bet they were glad when the school moved to Brook Street. It must have stank to high Heaven.) Nothing is left of the wheel or leat, which was fed from the Shuttern Brook passing near the building.

The tannery was run by a chap called Farrant in the mid 19th century, and the school by (possibly) his wife - certainly another Farrant. Before then the Oxenhams ran the tannery; one brother had that and another had the fellmonger's yard opposite where a house is now appropriately named Tanners Cottage. 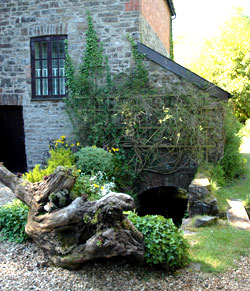 A Tucking Mill (one used in the thickening of woollen cloth) used to stand between Bampton and the Exeter Inn  - a farm nearby still retains the name.

The image on the right shows where the mill leat ran under the building which housed the wheel.

This is now a private house.

Many roads converged on Ford and its mill, which had ceased grinding corn by 1893 and was producing butter and cream instead. Both businesses ran in tandem for a while, for a list of fixtures at the mill drawn up in 1888 shows a fully equipped butter factory. It is not known when the mill was built but it was in use in 1666. Two cottages once stood beside the mill. They were derelict by 1900, and today only uneven ground remains. The mechanism of the mill and its wheel were made of iron and were taken during the 1939/1945 war as scrap for the war effort.