Bampton's Methodist Church in Mary Lane finally closed in 2005 having too few worshippers to be viable.

In 1766 John Wesley came to Bampton during one of his frequent visits to the West Country. His diary for September 21st records "I preached morning and evening in the market house (Tiverton) and at one in an open place at Bampton". 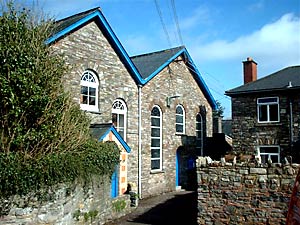 Nothing is recorded until 1816 when the Bishop of Exeter issued a licence to hold worship in the town  "..for people called Methodists".  The cause appears to have prospered as ten years later in 1826 the Bishop licensed  ".. a building known by the name of the Wesleyan Methodist Chapel, situate in Duckpaddle Street (now Brook Street) ... intended to be used as a place of religious worship". This church did not prosper as  records ceased. 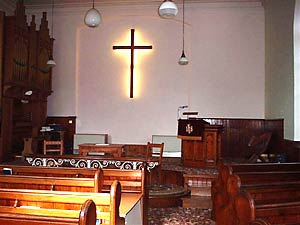 The Bible Christian movement within Methodism began preaching in the town in 1861. A society was formed on Christmas Day 1861 and by Good Friday they had purchased land here in Mary Lane and laid the foundation stone for a chapel and adjoining cottage. By August 1862 the chapel was opened and  there were Sunday services in the morning, afternoon and evening.
A Sunday School was started, which in 1885-7 was the largest in the local Methodist Circuit with 110 scholars. This group met in the church until a Sunday School building was added alongside the church. This addition was opened in 1896.
The next year an organ was purchased which served until the present one, a gift from Mrs S E Moore was installed in 1930.

The church has been renovated on several occasions over the years. The latest was in 1962 when the building's centenary was celebrated. At this time the choir seats were removed and the organ relocated to provide a larger front area.

1892  Mentioned the influenza epidemic "our lives have been graciously spared"
Salary of the Pastor £80 per annum; Assistant Pastor £25.
1893  Chapel renovated and efforts begun to pay off the debt, but a new harmonium was bought instead.
1895  The Pastor was due to leave and efforts made to ensure that he was fully paid before he left.
1901  Arrangements for a bazaar on Easter Monday: Tea for 200 required - Mr Stone to provide bread; Mr Mantle 50lbs of cake; Mrs Blackford 8/10lbs butter; Mr Down milk & cream; Mrs Down delicacies. Competition for     washing and peeling potatoes!
1905  Mrs Elizabeth Burge died: she had been the caretaker for 20 years, after her husband‘s death. Mr Greenwood appointed as the next caretaker, residing in the Chapel House rent free with the use of the garden.
1905 Rev Gilbert living in the Manse at Magnolia Villa, which was used up 1971 .
1908 Pew seat holders reorganised so that more income was received from pew rents.
1913 The chapel was licensed for weddings.
1916  Quarterly Meeting for the Tiverton Circuit was an all day affair!
11.30 Preachers Meeting
1.00  Luncheon
2.30  Business Session
4.00  Sermon
5.00  Tea
7.00  Public Meting
1919 Resolved to pay the organ blower 6/6d per quarter. If he was unable to attend he was required to find a suitable substitute. 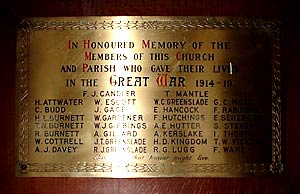 1919 War memorial placed in the church. It was unveiled on 24 July at noon, followed by a public lunch in the Drill Hall for all ex-servicemen. Then there was an afternoon Thanksgiving Service, after which there was tea      in the Drill Hall, rounded off with another public meeting in the Church.
1931 Mrs Moore (of Ford) died: she had been a Church member for 39 years, holding many offices. In her will she left a considerable sum divided between various aspects of church life, and for the setting up of an orphanage (this was not possible).
1978  This year the caretaker's pay was raised from £2 to £3 per annum!
1980  The membership was 19
1984  The caretaker's cottage was sold which enabled the church interior to be renovated, when the choir pews were removed. The organ and pulpit were relocated.  The community roll of those associated with the church was 80.
1986 An Adventure Club led to an extension of work among young people. Funds were raised and a mini-bus purchased.
Another fund-raising  method:  three ewes were purchased and fed by farmers and the lambs sold each season.
1989  Membership was 22
1997  A  "seed team"  of three young ladies was established through the Rob Frost organisation, but had to be withdrawn after 6 months because of their sickness.
1999  Membership was 10.
2003  One service a month was begun and alternative Sundays worship was with Petton Methodists or St Michael’s Parish Church
2004  Membership was 4 and it was decided that it was impractical to keep the services going.

2010 The building was sold to be converted into houses.