An ancient mediaeval charter shows that there was a 'burgage' in Bampton near the Church of St Mary - there may have been an earlier building (before 1400) on the site of the Swan or in the vicinity of the church. Part of the present Swan was originally lodgings to house the masons and other craftsmen who were hired to enlarge the church in 1450.

It was then sold to a churchwarden for one pound(!), and it became the Church Ale House, when ale for the village was brewed by the incumbent and churchwardens, the profits being used for the upkeep of the church. 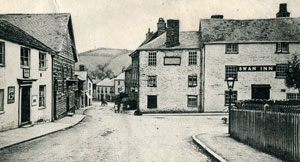 In about 1693, Richard Newte acquired the ale house, and the Newte family owned the property until 1775, during which time it seems to have been known as 'Mr Newte's House', and later as 'The George Inn', in honour of King George III.  When the new owner took over in 1769, the name was changed to 'The Swan'. 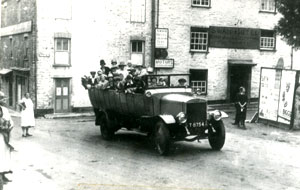 The part of The Swan which dates from 1450 is the present dining room and the barn behind it, visible from the churchyard and reached by a modern staircase in the bar. Until 1890, it was a two-storied building, the top floor being added to cater for the extra human traffic generated by the railway.

The old beams and fireplace are probably the genuine article, and the bread oven could well date from 1450.

he Swan also claims to have been one of the first buildings in Bampton to have electricity! - this was a battery D.C. supply in 1926, a steam generator from Scott's Quarries keeping the battery charged. To start with, only two 40W bulbs could be used at one time, and the charge was 1/6d per week (7.5p today, but a lot of money in those days).

The image of the Swan above was from before the inn was refurbished, and shows the porch with swan sculpture atop. The other two photos are from the early 1900's one with a charabanc taking folks for a trip!