In 1998 Bampton Town Council purchased a piece of overgrown woodland adjacent to Bampton Primary School at the end of School Close, with the object of creating a multipurpose amenity site. Lottery money was obtained for the transformation of this site into a Millennium Green.

Work finally began on the site in March 2000. This included the building of footpaths around the site, and a bridge over the stream. Although contractors were employed, volunteers carried out much of the work, particularly the clearance of shrubby growth and brambles.

Once the infrastructure was in place, a group of local primary school children helped to plant native woodland plants, such as bluebells, primroses and foxgloves under the remaining trees.

Thanks from The Countryside Agency 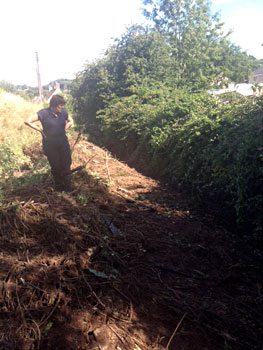 A Bampton town councillor, Jean Pope, and two volunteers spent a fine afternoon clearing the stream between the gate to the Millennium Green and the Pump House.

A great deal of rubbish was removed and at two points, where the water course had almost been filled to the top with rubbish, wood and stones, the digger drivers Mark and Neil, of Roadform of Newton Abbott, who were working on the School Close site came to the rescue.

With great skill and in very little time the stream was uncovered  and the bank made good. With a little more work cutting back brambles and removing dead wood and large stones the stream ran free again. 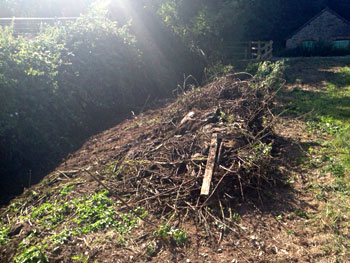 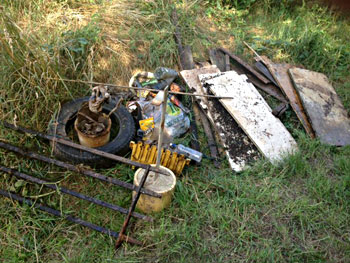 The snowdrop planting day in March this year was very successful and included tidying up the site.

The Millennium Green was established as a public amenity in the year 2000; it united three distinct areas of land - a woodland site with small quarry and limekiln, a small existing orchard and a field, Lower Luke's.

The 1.8 hectare site is a Public Open Space and a Wildlife Site, sadly rather neglected and consequently subjected to vandalism in recent years.

Funding has become available to carry out some essential safety work and other improvements; a working group has been established and a management plan has been agreed.

It is anticipated that a number of working parties, on dates to be announced, will give local people the opportunity to lend a hand with the aim of providing a family-friendly environment for all to enjoy.

Adjacent to the Millennium Green is the ancient lime kiln and its associated building - many such kilns used to be in this area of limestone quarries, and this one is being worked on in order to preserve this part of Bampton's history. We plan to give more details of the restoration here in the near future.

Much work still remains to be done, but this is an interesting and accessible place to come for everyone. The progress of the trees will be followed with enthusiasm - and of course this progress will be reported here on the web site.

* A 'medlar' is a small tree, related to the apple.

A complete list of all the varieties of trees planted and their sponsors is available.

A database is being set up concerning native plants which grow in every area of the country by the National History Museum. It is still under construction, and operates from the postcode of the area concerned. Bampton (EX16) has now been added - see here.