It is impossible to be anywhere in Bampton and not be conscious of the Motte standing at the eastern approach to the town.

This defensive area above the town would have originally been built by the Saxons, with some sort of wooden enclosure. When the Normans arrived, they favoured the classic construction of a keep on top of a mound, surrounded by a wooden enclosing wall or 'bailey' built in about 1067 AD - it was they who built the Motte the remains of which we see today. The only action it saw was a siege by King Stephen in 1136 when one man was hanged and the fortifications burnt down.

Later, a stone mansion was built on the Motte, and in 1336 the Lord of the Manor, Richard Cogan, obtained a licence from the king to castellate it and surround it with a stone and mortar wall. For more information, see Gatehouse Gazetteer - Bampton - The Motte 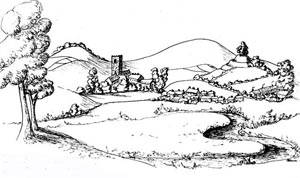 In 1607, an earthquake was felt in "divers parts of this realm" - the remains of Bampton Castle are reputed to have collapsed during an earthquake. (You might think earthquakes don't happen much in England, and might be surprised at the Map of Earthquakes!)

In 1801, a lot of its stonework, its well, and two surrounding ditches were clearly visible . The drawing on the right is based on one made at that time by Rev. Sweete. Note also the big spaces around the church.

Nothing now remains above ground of the castle stones - they have been 'recycled' into buildings in the area.

However, a back exit from the original bailey gave access to the Barton farm - there is still a flight of stone steps leading down into the fields towards Kersdown Barton which may have had their origins in that exit.

A very limited excavation was carried out in 1968 in a small area in the middle of the football pitch.

The drawing on the left shows the results of a RCHM survey in 1992 showing the earthworks surrounding the motte.

A more recent survey (using magnetometers) done in 2002 over the north end of the site has revealed a number of features which are likely to represent ditches, banks, and ridge-and-furrow ploughing. 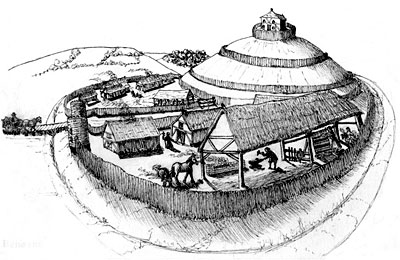 The drawing on the right was done by Barbara Keene. It shows an impression of what Bampton's Motte and Bailey might have looked like soon after the Norman invasion.

The modern football pitch has rather levelled things out! 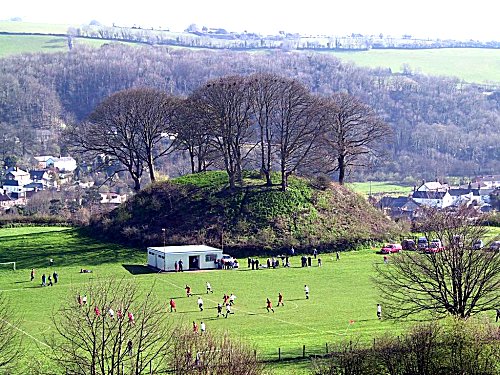 A series of very steep steps allows visitors to climb to the top of the motte - this affords splendid views across the whole town and across the water meadows along the valley. Yes the football pavilion is a truly hideous building!

At the start of 2016, the Motte has been transformed by contractors who have removed a lot of low scrub, saplings, and brambles which had covered the motte and its surrounds, making it difficult;t to see or to explore. Some photos below.