There were no fewer than nine lime-kilns in Bampton: the one at Millennium Green was recently restored with the aid of a substantial grant from the Heritage Lottery Fund. 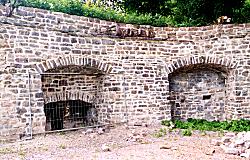 On the 1904 O.S. map are shown 9 kilns which were dotted around the town; they are shown with a small circle. There are other remains in Ford Road and Packhorse Way, the latter being best seen walking into the town from Ashleigh Park. A map is shown at the bottom of this page.

Kilns were usually built into the side of a hill, the top of the kiln being on level ground. They were shaped internally like an inverted cone - large at the top and small below. 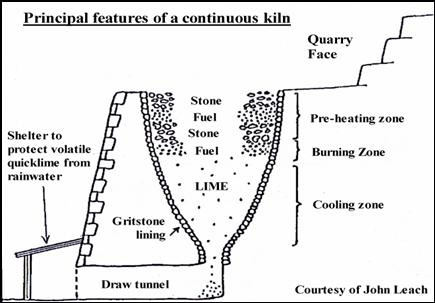 Alternate layers of limestone and coal were fed into the kiln from the top (hence the level ground), and the fire lit below. As the fire burned upwards, the whole moved down the tapering chamber, a man at the top keeping it filled, whilst another was at the bottom raking out the burnt lime ready to have it taken away to be crushed.

Bampton quarries used charcoal at first, then Welsh Culm, it burning hotter than ordinary coal, and left very little ash. Once the fire was lit it could stay lit for months. The culm was shipped in to the docks at Watchet, and brought by packhorse to Bampton. In 1801 a comparison was made between the prices of the Bampton lime and that of Westleigh: Bampton's was dearer, as the limestone was harder and more difficult to mine. Not a few tramps met their deaths in the nice warm limekilns - sleeping peacefully, they knew little of the carbon monoxide being let loose by the fire. The last lime produced in Bampton was in 1966.

Before the use of explosives, the limestone was drilled out. The drill, a long heavy metal stake, was held on the rock by one man, and hit alternately by two men, each wielding a sledgehammer, the stake being turned slightly between the hammers, giving a drilling action. The man with the stake must have had unshakeable faith in his companions! 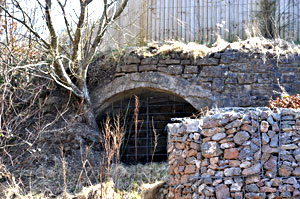 On the right is shown the remains of an old lime kiln which have been preserved in the new housing development at Scotts quarry. It can be clearly seen from the path which links Scotts to Bampton along the old railway line.

"To be sold. For the residue of a term of 1,000 years of which 810 years are unexpired. All those valuable estates called Westbrooke and Druitshayne ..... including a rock of excellent lime, a limekiln and a rivulet of water, the power of which may easily be applied to a wheel of large dimensions ....." 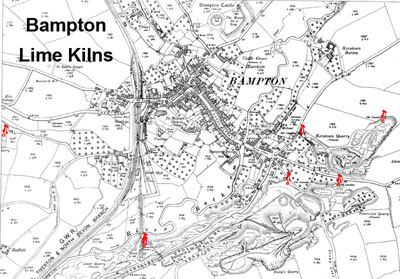